Notorious YouTube pranksters Shoky and Morthy are in deep trouble after their latest video left them penniless and doing community service, but they’re planning a comeback with the spectacular and bloody truth about a famous real-life ghost.

What is a YouTuber willing to do to be taken seriously? Stage something big and film it! Štěpán Kozub is Šimon (alias Shoky) and Jakub Štáfek is Martin (alias Morthy). They’re two reckless guys whose failing YouTube career is about to change forever due to an accident on the 168th kilometre of the D1 motorway, near a place called The Nine Crosses. Directed by Andy Fehu, this is a comedy about the quest for followers, shooting videos on the edge and behaving very badly.

Shoky and Morthy have been friends since school and are YouTubers with a promising career. However, Morthy is growing tired of their childish pranks and, what’s more, he has a new girlfriend, ambitious influencer Sára. When their controversial video of a grocery store robbery is hugely criticized on social networks, Shoky and Morthy are sentenced to community work and their channel is demonetized. The boys decide to split and go their own ways. Their only chance of improving their tarnished YouTube reputation is a devilish plan for one ‘last big thing’. Shoky, Morthy and Sára, with ambitious ghost hunter Lucie and older traditional YouTuber Radomil, embark on a wild ride to a mysterious roadhouse, The Nine Crosses. 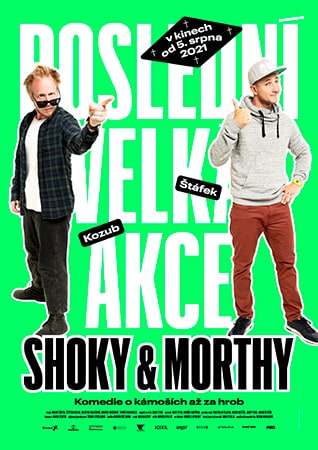